The American Scandinavian Society presents some of its Grant Recipients in honor of Harriet Nilsen and stay for a reception after the concert.

Read an article written about the concert by Kirsten V. Philippides, a local New York editor

– Learn more about them at the bottom of the page 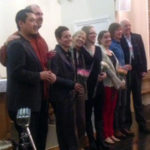 The multiple genres flutist and composer, award winning and resident of NYC- Yael Acher a.k.a. “KAT” MODIANO returns to the Winter Concert, with her original soulful Jazzy-funky tunes from the newly released CD: “KAT”&”MOON” in Manna-hata.
“KAT” will be joined by some of NYC’s finest international Jazz musicians.

“The alert and poetic flute of the leader interact their inventive lines, supported by a dynamic energetic rhythm”- JAZZ magazine, Paris.

-“The idea of light emerging, dying, emerging again is a sensual one and it is done here with great beauty and avocation” – New Music Connoisseur, NYC.

Helena Liljeblad has been very active within the Scandinavian music scene in New York for the last 14 years, after graduating with a degree in music and theatre from the University of North Texas. She is professionally trained in all areas of voice from classical to musical theatre. She has performed on many NYC stages as a soloist as well in ensemble settings. Her Swedish heritage has granted her some very special performance opportunities throughout the years, including many scandinavian cultural events around the city, which she is very grateful for. These last two years, she has also had the honor of being the Lucia at the annual American Scandinavian Society’s Christmas Ball.

Ms Kveli is also known as “Cochlea Freedom” when diving head first into her Avant garde solo voice compositions and conceptual pieces. She performs and creates together with the Cochlea Freedom Ensemble, which base themselves upon freedom and improvisation as tools for self-realization, currently through the project “Blog’s on you”, where the ensemble is blogging pieces. Standard modern repertoire and late romantic operatic styles are explored with collaborator and husband Tor Morten Kjøsnes.

Summer 2012, Kveli was head-hunted by sculptor/film maker Matthew Barney, for his upcoming large-scale film project, “River of Fundament”, to be released in 2014. In 2012, Kveli released her first folk album, titled “Release the Virgin.” Current projects for Kjersti is the Cochlea Freedom solo album of her song suite: “Animal Songs”, and the Seterkauk.com project consisting of collecting and arranging old Cow Call melodies from Snåsa, Norway . Both projects will result in album releases in 2013 and 2014.