With Restauration through Hell Gate to The Promised Land

Come and learn more about the Scandinavian Mayflower! 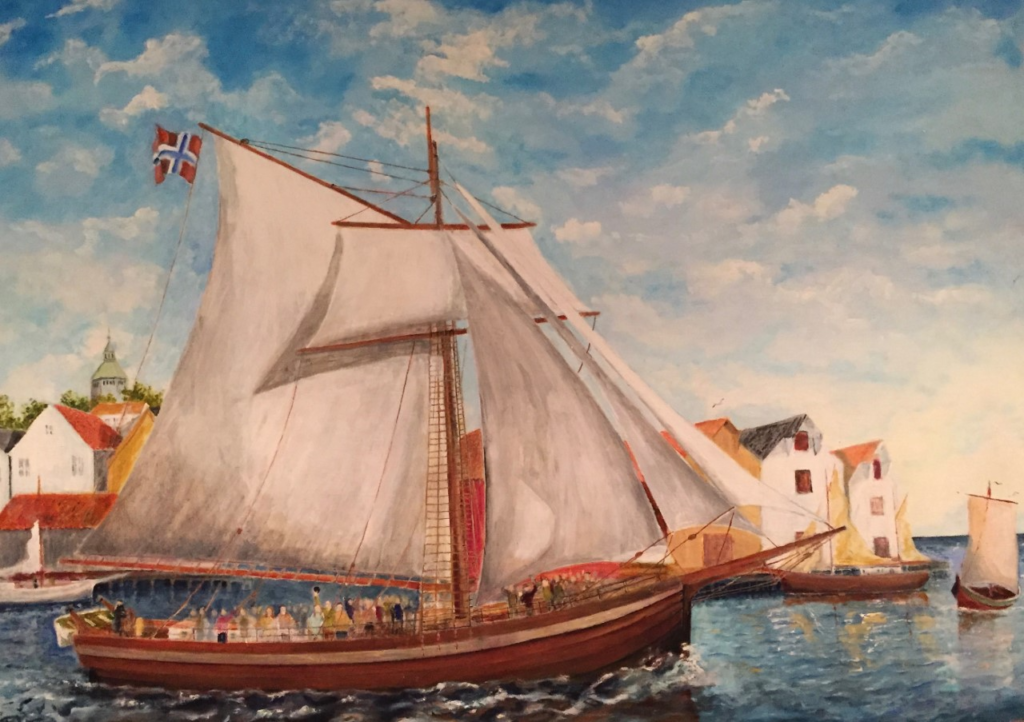 The emigrants leaving Norway for a better life in the US

The first Norwegian emigration group, left Norway July 4th 1825 and reached New York several months later. Among the emigrants were men and women, young people and children. But who were this people and why did they leave their homes? What happened on the crossing of the Atlantic, and how was the arrival in New York?

Meet professional storyteller Anne Elisebeth Skogen based in Sand, Norway, and her story “With Restauration through Hell Gate to The Promised Land.” She will be doing the presentation from the Ryfylke Museum in Sand, which is a museum for several municipalities outside Stavanger Norway. There is no better way to spend a Sunday afternoon in January than to learn about the very start of modern Norwegian immigration to USA!

Watch the recording of the event: 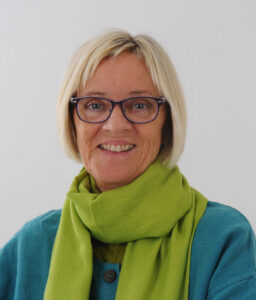 Anne Elisebeth Skogen grew up in the little town of Egersund, Norway, south of Stavanger. For the last 37 years, she has lived in Sand, in the fjords northeast of Stavanger. She is a teacher with additional education in drama and storytelling, and has spent the last 20 years teaching drama and theatre at a culture school for youth. Now retired, Anne Elisebeth runs her own storytelling business, telling stories for schools, organizations, festivals, and companies. She practices her stories in her “outdoor office”– while hiking in the mountains and in the woods! She has visited the United States with a tour in 2012, and also performances in 2010, 2011, and 2018. She also has participated twice in the Moth Story Slam in New York. She is married to a historian, and they share an interest in Norwegian emigration. They have four children and two grandchildren. 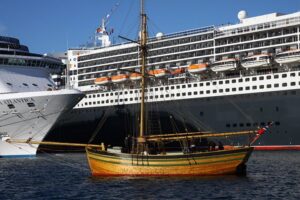 The replica of Restauration, built in 2010. The cruise ship «Queen Mary» was one of the guests, and shows the size of the emigrant’s ship. (Photograf: Roy Storvik)

The first Norwegian emigration group, left Norway July 4th 1825. Among the emigrants were men and women, young people and children. But who were this people and why did they leave their homes? What happened on the crossing of the Atlantic, and how was the arrival in New York?

When she (Anne Elisebeth) started to work with the story “With Restauration through Hell Gate to The Promised Land”, she first of all started reading whatever she could find of written sources about the emigration. One of the books was “The Sloopers”, written by Hart Rosdail. In 2010 she and her husband visited Historical Society in New York. There she was sitting with white gloves browsing and reading the original NY-newspapers from 1825 October 10th and 12th, about the arrival of Restauration. She also traveled the same route as the Sloopers from New York to Holley and Kendall. She tells: “It was great to walk on the old tout path along the canal, and to walk in the canal aqueduct that cross Genesee River in Rochester”. And that travel also is a source for the story.

During the work she learned that the different Sloopers (the emigrants)- descendants have different versions of the same story. So sometimes she has had to select, and the finally story is her version.

2025 National Jubilee of the Bicentennial of Norwegian Emigration:

Since the Restauration left Stavanger for the U.S. with 52 Norwegian passengers in 1825, about 900,000 Norwegians have emigrated to North America and another 100,000 Norwegians have moved to locations throughout the world. Learn more about the planning of this 200 year celebration honoring this significant event in our international history.